I'm not going to be in the top echelon of ultra runners and never aim to be. Frankly if things don't ache, break or just drop off it's a bonus.

For me the joy of running is.. the joy of running. Cutting loose, letting go, pulling on the trainers and "seeing what happens if I run x". I suppose that makes me a fun runner, which despite being a fairly dismissive phrase actually makes real sense.

Why do something if it's not fun / entertaining / challenging? Why just grind out the miles if there's no real desire to do so? Having spent most of this year reading & researching perspectives on why & how we do this maddest of sports, one thing keeps cropping up - mojo.

Without this elusive element, the desire to put in the miles and put up with the aches & pains fades, and suddenly questions begin to appear that without mojo are very hard to answer. Without the desire and enjoyment of both training and racing, it's very easy to just let it all slide.
I need to find a way to sell this as a drink supplement. I'd make millions.

I have to hold my hand up here and admit that the 2 month 'injury' I had over the summer was actually 3 weeks of injury and a further 5 weeks of 'couldn't be bothered going out for a run'. It was only after kicked myself up the arse and turned up to the SVP100 I found that elusive mojo again.There was no way I was going to be a DNS - I'm too tight to waste the entry fee & train tickets.

So back to current racing and a brief report on the Wye 50.. a point-to-point race through Wales from the start of the Wye to Glasbury just north of the Brecon Beacons.


The compulsory kit for MCN events is fairly comprehensive. I'd bought Trespass 300gm waterproof top the week before & squeezed this in between the bottles on my UltraAspire belt - something that has become a firm favorite for kit & hydration. Mainly because I haven't got anything else. It works so well I'm not even looking.

A medikit with space blanket, compass, whistle and an assortment of plasters, bandages & compeed complemented the kit, and finally the old blue pouch (£2 from a pound store) held 4 Snickers, Nuun tablets and the Petzl. All done. And unlike the packs, it lets me display the Idiot shirt to full effect.

HQ for Team Idiot was a tent in the luxurious surroundings of Cwm Bach. An apt name for the end of the 50 mile run. As for all ultras so far the tent was packed as standard pre or post-race kit. It may seem a bit nuts to some, but knowing you can lie down in a warm, comfy bed just meters from the finish line is as powerful an incentive as any amount of beer or chocolate I can imagine. And there's no trek to the start either 8)


Registration sorted on Friday night I retired early and listened to Radio Wales for a bit (you can't get many other starions up there). At 4:30 Saturday morning it was time to get up, pack up and get on the bus to the start. After a bit of standing around and a short briefing, at 7:30 as dawn just tickled the hilltops Matt rang the cowbell that signaled the race start and off we trotted towards the hills.

The early pace was steady, mainly due to two 1700' hills in the first 7 miles. Once those were done it flattened out a little and checkpoints started to roll around for a chance to scarf down some Gu and refill on water. I've found Gu reasonably palatable but I still think gels taste like sweet wallpaper paste.

Crossing another hill shortly after CP2 brought us out at the Penygarreg Reservoir. As we plodded around the reservoirs it did seem like there was a bit too much tarmac for most people's liking. We had some long road sections that left us looking forward to the next hill, just for a change of pace. Slogging along miles of road isn't really what I was expecting, though one we got away from this and up in the hills things improved immensely.

One of the most enjoyable parts to ultra running for me is chatting to the people I end up running with through the race. It's interesting how people go through good and bad patches at different stages - you may drop off the back of a group only to meet them an hour or two down the road. Or in my case at the finish for that sympathy applause as they're taking down the banners and clearing up. 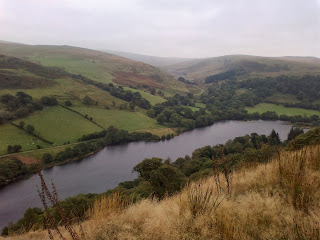 You can also take a lot of motivation from the people around you. Through one of my rough patches I was lucky enough to be running with a lady from Wakefield. We chatted about everything under the sun and I was fascinated with her pending attempt on the Bob Graham Round. She was running so well & easily that I have no doubt she'll part of the 24 hour club very soon. One more on the "to do" list.

Throughout the race I'd been leapfrogging Karl & Kitty. This was Kitty's first time running anything over 18 miles and she kicked my ass. Karl was pacing her and as it turned out had unfinished business with SDW100 as he missed the buckle by minutes this year. Both were great company and Karl, being a military lad, gave me some much-needed encouragement to break the 10h barrier.

The last 7 miles was pancake flat beside the Wye. By this time the legs were beginning to remember the efforts on the hills and though I felt like I had plenty left, they wouldn't obey and kept demanding walk breaks. At the last CP with 3.3 miles left I had 38 minutes to break the 10h barrier, so I ditched my water to save on weight and overruled my mutinous legs, managing to finish in an official 9:59:17.. 43 seconds to spare after 10 hours of running.

I'm pretty happy with an average 5mph. Not the top echelon but as I said, I'm in this for the fun. And those hills certainly were a joy to put behind you. I've promised myself a few trips over to Pen-y-Fan for some proper hill sessions soon.

In other news the gift of the blag strikes again, as I now have race number 1 for SVP2014. I may have to stick in some proper training to do that justice. With the race being earlier and all the footpaths intact, it should be perfect to go for 10-hour finish so I can qualify to kick Israel's butt in our Spartathlon Challenge 2015.

As I'd decided on long hills rather than a quick flat dash, I donated my Amsterdam Marathon place to a friend of a friend, so best of British to Arjen who will be running as #3011.

Finally I've spotted an intriguing 5 islands ultra around the channel islands, so in usual comedic style I've stuck in an entry. We'll see how that one pans out.

Next up: The Piece of String Fun Run 29-Nov.


*Apologies to @Simon_Lamb for nicking his blog title (ish).