I had booked in to a local Newmarket pub close to the start. Downside = they had a band playing Friday night that would make Disaster Area sound like St Winifreds School Choir, so no sleep for me till midnight. But I did get a good back massage through the bass vibrations from the floor. Upside = they opened the kitchen early for me and I managed to scarf down a large fried breakfast before setting off, so I was amply fueled for anything the SVP may throw at us.

Saturday morning 7:15 saw 30-odd runners assemble for the early start. The fast, lean running machines went two hours later. The difference in start times means I gained an advantage and managed to munch my way through 4 checkpoints before being overtaken by the more running-orientated competitors. The majority of the fast bunch did look like they needed the food more than I did, though to let such a great spread spoil would be criminal. So I did my best.

As the race progressed I cleared a slippery Devils Dyke in the rain, then buddied up with  Jem and Simon to lead the first group, after they first decided to add an extra 2k to the route by getting lost. Together we ran up some lovely ploughed fields taking most of the clay soil with us, passed the same beardy guy in a camper van at several key waypoints (thanks for the water refill) and were hooted, clapped and cajoled on by a load of cheery checkpoint chappies, including Organiser Matt, Matt's Mum, and James Adams who very kindly blogged LeJOG. I must admit I was very rude to the guy, pointing at him and saying something inane along the lines of "I know you from Facebook - you're James Elson". I was glad of the protection of my fluorescent "Idiots Running Club" T-shirt, which thankfully proved a great disclaimer throughout. 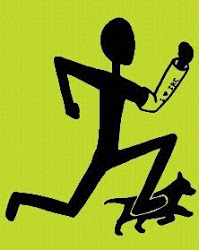 One part that sticks in the mind was at Long Melford Hall. The Stour Valley Path goes directly down the "grand avenue" though the gates half-way down the long driveway were chained shut, with only an open door to the gatehouse marked "gift shop". I jogged through, apologised for the muddy footprints to the the cashier, sheepishly pointed to the T-shirt by way of an explanation and exited quickly. Well, if you apply the "exit through the gift shop" policy on a national trail you have to expect all & sundry coming through - and at that point I definitely fell into the sundry category.

As the race went on it was clear that Simon was suffering, as he was losing touch with Jem and I on the hills. We hit the 50k mark in around 5h 30 and with back problems becoming too much he decided to bail at the next CP, which left the two of us to carry on. I was still feeling OK but Jem's knees were beginning to suffer. As both of us were in this for a finish rather than a time, we decided only to run the flat sections. My legs were overjoyed and we had the chance to stride out and look around a bit rather than head-down plodding.

The checkpoints started at mile 13 and the distance between decreased as the race progressed, though the last two must have been mis-marked as my legs were certain I ran 26 and 34 miles respectively. The mandatory head-torch came in handy as we ran the last 2 hours in the dark and river-mist. Eery, chilly but exciting at the same time. As an additional kicker the last 3 gates were padlocked shut so a bit of climbing was in order. Just what you need in the dark after 60 miles and 14h running, but we were so close to finishing we'd have crawled through barbed wire just to get to the point where you can stop running and lie down. 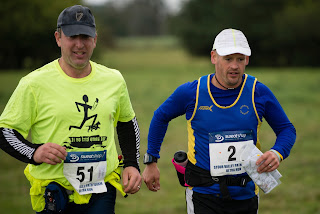 The organisation was second-to-none with great route maps and tape markers complementing the normal SVP signs. These proved to be invaluable as we played "spot the tape". First person to spot shouted "TAPE". Sounds like the sort of game a 5-year-old would quickly tire of but after 50+ miles neither of us had many marbles left and anything that took the mind away from grinding out the miles was a bonus.

We eventually managed to cross the line together at 9:35pm in 14:20, hands held high in celebration that it was all over. Job done. As is was pretty cold by the river, Jem and I said our farewells and he left.  I had intended to find a B&B but was so drained I just put up a tent by the trees and crawled in, crashing out till 7am and a short walk to Manningtree train station and home.

Two days down I can now walk up stairs without holding on to the walls, and may even try a light jog tomorrow. Chuffed to bits that I managed to avoid the dreaded DNF & really glad we both booked a finish under the cutoff. Despite his "never again" comments in the low-points I had the cheek to tell Jem that it won't be his last. I have a feeling it won't be.

Very well organised, marked and staffed ultra from Matt and Nic - already asked if I can pay now to book number #1 for next year. We will see ;)

For me it's the start of the winter lumpy stuff, next stop Wales for the Wye Valley 50